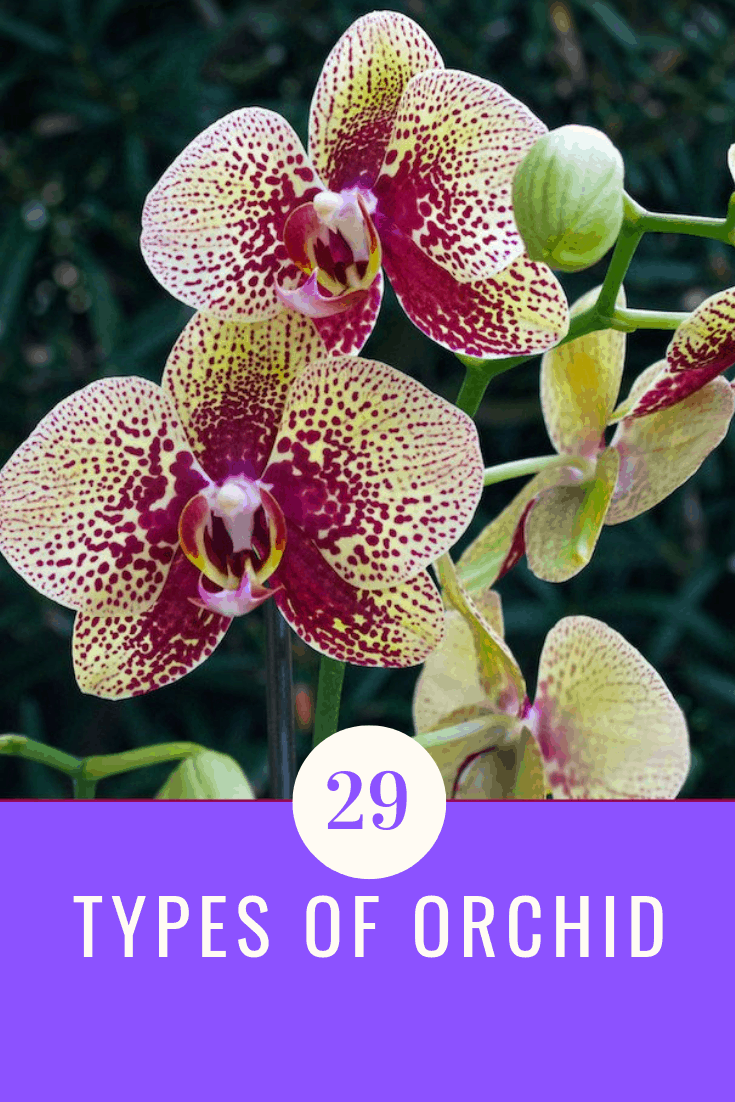 Anybody that develops a liking for orchids will soon realize how exciting this family of plants is. To assist you in gaining an understanding of these plants here is a guide to 30 different types of orchids.

This white flower only provides scent from the evening onwards, and moths pollinate it.

This type of orchid sheds its leaves, so there is no need to be alarmed if it does this to you. There are male and female varieties of this orchid, with some being pollinated by bees.

It is easily the most popular type of orchid included in flower bouquets. There are many hybrid variations of this orchid; some of them appear individually in this list.

Cycrchies is a subtype of the Cattleya orchid; the male version is also known as the Swan Orchid.

This type of orchid produces smaller but more numerous flowers.

This type of orchid produces top-heavy plants yet with well over 1000 species it is hard to give specific features for this type. Some of the most common species are yellow, white, yellow and lavender.

The Cockleshell orchid as gardeners also knows it. Some say it is like an octopus because of how it’s petals look.

Now the Epidendrum type of orchid needs to be in a great deal of light before any of its flowers bloom.

This type of orchid will only grow during the summer

This kind of orchid is called the wimp orchid, and it resembles pansies. It flowers throughout spring and also summers too.

The Lycaste is another type of orchid that loses its leaves during the winter months.

Oncidium orchids are compared to dancing girls, yet you to keep them in humid and damp conditions; otherwise, the leaves will fall off.

The Nun’s Cap orchid is certainly one of the larger types of orchid, generally being grown from cuttings 4 foot in length.

The Moth’s Orchid is so much easier to say than trying to pronounce the Greek name for it. If you are new to keeping orchids, then this would be the ideal type to buy first, low maintenance but with lovely flowers.

If you cannot resist the urge to water orchids every day, then this is the best type for you, as it is virtually impossible to over water them.

The Butterfly Orchid is relatively easy to cultivate as far as orchids go, so it is a bit of a mystery as to why it is not more popular than it is. You only need modest amounts of water and light for it to produce flowers for a few months every year.

Now the Vanda orchid is a type that needs to be well catered for to thrive. Get these if you have time to spare and want to make the conditions right.

These orchids when well cared for produce scent from the start of fall to the end of spring.

These orchids tend to produce purple flowers and originate from Mexico. Consider putting this outside as they can grow tall.

This variant is also called the Bucket orchid as the petals look like buckets, and it is a fragrant flower. It would help if you grew these in baskets to allow the stem to come out of the bottom.

Disa orchids need to be cared for differently than other types of orchid to allow to survive. It needs more water than the rest it will die.

The Gongora is related to the Stanhopea plant. It is a thirsty type of orchid needing to be watered frequently no matter what season of the year. They produce spicy fragrances similar to nutmeg.

The Laelia usually produces pink and purple flowers. They are almost identical to Cattleya orchids and need to be grown and nurtured in the same way.

Different types of orchid are covered by the Lady Slipper moniker, as the flowers all look similar to Lady Slippers. The slipper refers to the part of the plant in, which the insect gets in and cannot leave until it has pollinated the orchid.

The Mormodes differ from the other kinds of orchid as their stems twist differently.

This type comes from the Andes so are quite at home in a cold environment provided that there is enough humidity. It produces beautiful flowers in a wide range of different colors.

As the flowers for this beautiful type of orchid can grow large, it may be worth checking if you have enough room for these before buying any.

Helen Allen holds a degree in landscape design and has worked for clients all over the country over the course of her 15+ year career. By combining elements of nature with her clients’ needs, she has created thousands of lush landscapes in yards of all sizes, ranging from townhouses to botanical gardens. Whether creating entertaining spaces or quiet areas to stroll, Helen is a master at unique landscape design that blends together the outdoors and other elements that bring harmony.